Let me tell you a story about “dan-sha-ri (断捨離)” which took Japan by storm around 2010 and seems to be still firmly rooted in people’s hearts. In 2019, when Marie Kondo’s method of tidying up, known as “Konmari,” was broadcast on Netflix, people around the world shouted, “Spark Joy!”

The term “dan-sha-ri (decluttering)” originally comes from the practice of yoga. However, it was Hideko Yamashita who popularized the term in a slightly different way throughout Japan. The word “declutter” is a series of three words that mean “to separate.

断 (dan): To cut off: things that come into one’s life.

捨 (sha): Discard: to throw away the things around you.

離 (ri): Release: to get rid of attachment to things.

In her book, “New Tidying Up Techniques: Dan-Sha-Ri” published in 2009, Yamashita proposed that we let go of things we don’t need and live a life free from things.  It quickly spread across Japan, sweeping away the tendency that possessing things was a symbol of wealth, and making people praise a life with less material possessions. In any case, the term “abandonment” seems to have been perfectly suited to the Japanese people’s stoic nature, and it is still used in every corner of the country.

The Japanese way of tidying up became popular among Westerners when Marie Kondo, aka “Konmari,” advocated “Spark Joy!” Instead of throwing things away recklessly, decide whether you need them or not, based on whether you feel a crush on them or not, she advised. Basically, it’s the same idea as “decluttering,” which was popular in Japan. Still, perhaps the Japanese spirituality of the “Konmari method” and its gentle, non-assertive nature stuck in the minds of Westerners.

If you are subscribed to Netflix, you can enjoy Mari Kondo’s extremely successful series.

As soon as the reality show was launched on Netflix in 2019, the “Konmari boom” was ignited, as you probably remember.

These trends, of course, reflect the world and the times. Needless to say, the minimalism of this way of life is a reaction to a time when people thought that they could get whatever they wanted for a price, or that living in a big house and having a lot of stuff was a symbol of wealth. Now, with the spread of the coronavirus, people are beginning to see the disadvantages of living a simple life without stockpiling, and a new movement is beginning to emerge that says, “I want to be surrounded by the things I like and forget about this disturbing world when I’m at home!”.

In the art world, there was a time when the “Minimal Art” movement took off.  It peaked from the 1960s to the 1970s and was centred in the United States. It was characterized by eliminating all ornamentation, extreme simplicity of form, the use of industrial materials, and the elimination of emotion. The philosophy of the movement was to create something beyond reason or something beyond the artistic.

Among Japanese artists, we can mention Tadaaki Kuwayama, who moved to the United States in 1958 and became the driving force behind the spreading of minimal art. “I couldn’t stand the fact that people had a preconceived notion that just because I was a Japanese writer, I had to have Oriental ideas in me. It was a pity that I couldn’t easily convey my desire to express something that surpassed all such things and went far beyond.”, the artist warns against the stereotypical mindset of critics who take the idea of Zen to be contained in his personality, simply because he is Japanese.

Some thoughts flowing in the Japanese consciousness are indeed different from the Western way of thinking. Still, I think this assessment would have been frustrating for Kuwayama, who wanted to break through and eliminate all unnecessary elements.

This trend of minimal art was passed on to conceptual art, and then to Mono-ha, which became a unique art movement in Japan.

So, is there an artist at Micheko Galerie who is a member of the minimalist art movement? If I had to be a bit bold, I would say that Kazunori Kura is influenced partly by minimal and conceptual

Let me introduce “Vertical Evolution”. This work refers to us, Homo sapiens, the only vertebrate that walks on two legs with its brain facing the sky. The installation stretches vertically from the third cervical vertebra (C3), gradually changing its shape as it moves upward, and at the very top, it transforms into a perfect propeller. The significance of this is that it represents the evolution of vertebrate existence into an existence driven by an intellectual quest to reach for the stars.

In minimal art, there are many works in which the material itself exists with a bang, and the viewer is puzzled by the minimal method of expression and cannot help but wonder, “What is this? But that’s what these artists wanted because they were driven by the urge to eliminate the artistic element. 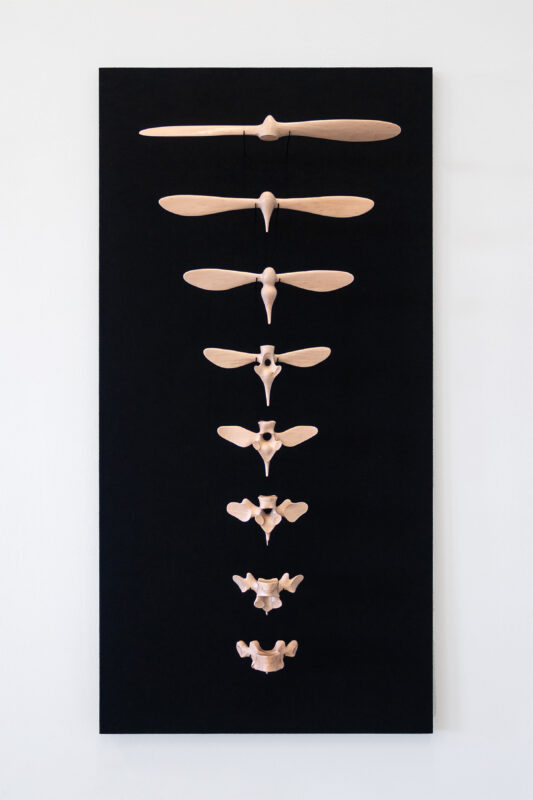 Now that “danshari” and “Konmari” methods are becoming less popular, I’m finally ready to get rid of my overabundance of belongings. I’m a little behind the trend, but I’m going to start decluttering!

We use cookies to ensure that we give you the best experience on our website. If you continue without changing your settings, we'll assume that you are happy to receive all cookies from this website. More information can be found here.
Go to Top