Hiromi Ishii, a businessman based in Tokyo Japan, has collected over a period of over thirty years antique everyday objects from Japan that in part reach back to the 16th century.

A special passion of Hiromi Ishii are katagami, stencils made of mulberry paper, which were used to apply colored patterns on kimono fabrics. 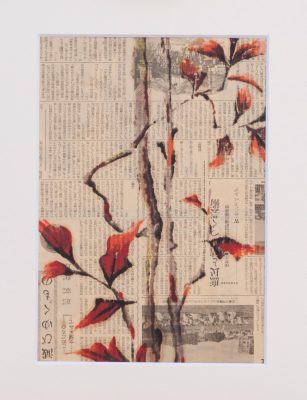 Repetitive forms and clean cuts define the special aesthetics of these stencils, which were declared an immaterial cultural treasure in Japan in 1959. In the meanwhile old katagami have become sought after collectors items, also outside of Japan.

One of the most important and largest collections of katagami is at the Museum of Decorative Arts in Dresden, which in 2015 exhibited for the first time a very small part of its approximately 16,000 specimens at the Japanisches Palais. At Micheko, you will see a selection of katagami stencils, which in their elegance and subtlety present itself in a quite contemporary manner. These are the testimonies of past craftsmanship, which is innovative in its design and at the same time of an impressive timelessness and modernity.

Further antiques from the Ishii collection complete the exhibition.